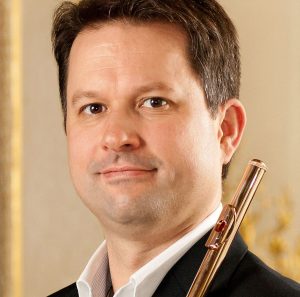 Jan Ostrý was born in Prague, where he studied at the Prague State Conservatory, at the CNR de Versailles and at the CNSM de Lyon, in the class of prof. Ph. Bernold, where he was unanimously awarded with the First Prize.

As a soloist or a member of chamber ensembles he performed in several countries in Europe and also in various festivals – Styriarte in Graz, Haydn Festspiele in Eisenstadt, Prague Spring, Concertgebouw Amsterdam, International Flute Festival Maastricht, Week of Pierre Boulez under composer direction and many others. Jan Ostrý recorded CD’s with chamber music for the labels: Studio, Naxos and complete of Bach’s sonatas for two flutes and Haydn and Stamic trios for Nimbus Records. During the concert season 1999/2000 Jan Ostrý was a substitute as the solo-flutist in Orchestre National de Lyon, and in the season 2001/2002 the solo-flutist in Den Norske Operaen in Oslo.

Since 2001 he has been regulary teaching at masterclasses of the European Flute Academy in Fiss and from 2003 at the Kulturtage in Neuberg. He is a professor at the Musik und Kunst Privatuniversität in Wien, at the State Conservatory in Prague and in Faculty of Fine Arts in University of Ostrava.