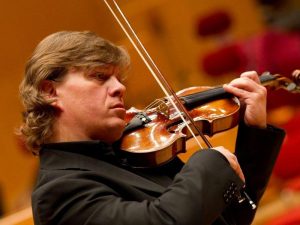 Juraj Čižmarovič is one of the most celebrated Slovakian violinists. He has won numerous prizes and awards at national  and international competitions, including the violin competition in Belgrade, the Slovakian National Competition and the Tibor Varga Competition.

Solo appearances have taken him to many European countries, the USA, Japan, and Korea. He performes regularly with renowned orchestras, among them the Budapest Radio Symphony Orchestera, the Portland Symphony Orchestra, the Orchestre de la Suisse Romande, the Czech Philharmonic Orchestra and the Tonhalle Orchestra Zurich.

He has collaborated with such distinguished conductors as Daniel Barenboim, James Levine, Pierre Boulez, Christian Thielemann and Giuseppe Sinopoli and is a guest at festivals, including the Rheingau Musikfestival and the Bratislava Music Festival.

In addition to his extensive solo career, Juraj Cizmarovic also devotes himself to chamber music. He is the founder and director of the Cimarosa Chamber Orchestra, which is composed of musicians who have performed with various European orchestras an chamber music ensembles for many years. Through his work with the orchestra he discovered his love of conducting and is currently making a name for himself as a conductor as well.